Technically the 8th film in the Rocky franchise, a sequel to the 2015 ‘Creed’ and a follow-up to the fantastic ‘Rocky IV’! This sequel needed to do so much to entertain both old and new fans as well as create a story which felt like a natural progression of everything that we had seen before. Luckily, the movie is crammed with unforgettable performances and so much drama!

As Adonis Creed (Michael B. Jordan) continues his reign as Heavyweight Champion, he is eventually challenged by boxer Viktor Drago. Why is this opponent so significant? He is the son of Ivan Drago, the man who killed Apollo Creed in the ring over 30 years ago. While Adonis is certain he can take on Viktor, Rocky (Sylvester Stallone) says he will have no part in this match and refuses to see his protégé possibly suffer the same fate as his father.

Just like ‘Creed’ and the other Rocky films, the fights inside the ring can sometimes be as hard-hitting as those outside of it. This time, we see the relationship of Adonis and Bianca (Tessa Thompson) continue to grow as they begin to consider the life they will have together. The two go through some upsetting times, but will they be there for each other in the end?

Also, we get a lot of focus on Drago (Dolph Lundgren) and his son Viktor as we see the former fighter has since been disgraced and even pushed away from his home country of Russia. Ivan and his son have kept up a rigorous training regime in the hopes that they can return to their home and earn back their pride. Did I honestly feel some emotion towards the man who killed Apollo Creed? I did. Damn it!

The fight choreography in this film is as good as it has ever been. Every punch hits the audience almost as hard as it does to each fighter, the boxing is indeed as epic as ever and the stakes are possibly at the highest in this franchise since the 1980’s. Steven Caple Jr. is the man in charge behind the camera this time and he makes sure that Ryan Coogler’s hard work continues to pay off. Also, with a script co-written by Stallone, the man who created this world, you know you will get the best from both Rocky Balboa and Lundgren’s Drago.

The shadow of what has come before always looms throughout this film. We know that Adonis is always trying to break out of the shadow of his father, and I say that this is the film where we reach that turning point where the torch has truly been passed on to the next generation. Saying that, the past and the future perfectly collide within this sequel and propels the franchise to heights that many would never have had expected it to touch ever again. 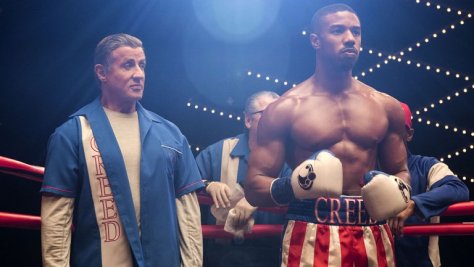 With a number of cameos which will be a treat to lifelong fans, an emotional dent that is delivered by Michael B. Jordan and Tessa Thompson that will bring a tear to your eye and the breathless boxing match which ultimately sees the second generation of Creed and Drago fight both for themselves and for their fathers.

Truly one of the best films to come out in 2018 and personally for me the best Rocky film since 1985!

Thor is a great Marvel character and he unfortunately has not had a great run when it comes to his own films. While I did enjoy the first movie and The Dark World was enjoyable with some great set pieces, this threequel was indeed a truly spectacular action film with so much comedy and ties into the MCU more than you may have imagined.

Chris Hemsworth returns to play Thor for the sixth time (following Thor 1 and 2, Avengers 1 and 2 and also his cameo appearance in Doctor Strange). Building on his more upbeat and joke-like nature from his last few appearances, Thor is at his best in this film as a more mature fighter but has the attitude of a frat guy! While he does embark on a journey throughout the cosmos, he does have a lot of fun along the way.

There is so much going on in this film, it does feel like a real journey as we travel between Earth, Sakaar and Asgard. Not much of a spoiler, but the impact of Thor losing his hammer does help with building the actual threat that new villain Hela represents (Cate Blanchett, who just steals the show and is deliciously evil from beginning to end). While Thor is thrown out of the picture and unable to stop Hela trying to take over Asgard, we see The God Of Thunder take on new challenges in the form of The Grandmaster (Jeff Goldblum), the Asgardian Valkyrie (Tessa Thompson) and an old friend with a bit of a temper (Mark Ruffalo, who is on screen less than his CGI counterpart)!

While we may not get a Planet Hulk film, consider this almost an epilogue to one we would have received. As Thor is forced into a gladiator style fight with the green hero, we see the two mighty Avengers battle it out in a brutal and enjoyable match-up. Avengers: Age Of Ultron may have seen Hulk take off to protect the earth, we find that he has been in Hulk mode for over two years and is considered a champion on Sakaar with a sense of intelligence and growth in that time. To have Hulk in this film is a stroke of genius and he fits in perfectly with everything that is happening.

As Thor has spent a few years trying to prevent Ragnarok from happening, we see him interact with many old faces and new. The few cameos that come up will bring an adrenaline shot to any Marvel Cinematic Universe fanatics and a few more laughs to go with the already strong comedic tone throughout.

Tom Hiddleston’s Loki, in possibly his least prominent role was still vital for a good chunk of the runtime and indeed shows why he is still one of the best characters to come from this franchise. Heimdall, Odin and even Doctor Strange all get their chance to shine in this film, but the big star apart from Thor and Hulk is definitely Hela. The Goddess Of Death is shown to be more significant to Thor than we could first have guessed and a consequence of their final interaction in the film will see a permanent change to the Thunder God.

If you think you know what will happen by the trailers alone, you are going to be in for a shock (God Of Thunder joke there!). While the dialogue may be more improvised than most other MCU works, the natural progression through their conversations is incredible. Hela is evil, but cool and Loki is still a sneaky bastard with more layers to him than an onion. Also, I would pay admission again just to see 2 hours of Jeff Goldblum playing…well, Jeff Goldblum as The Grandmaster!

Taika Waititi has indeed made a brilliant film. If another Thor is to be made or they need someone for a future MCU movie with a comic slant, why not get Waititi back? Also, he made the character Korg a great addition for the film series and I hope he will be back soon. The movie is a visual delight throughout and possibly the most impressive blend of action and effects that only Doctor Strange can rival. Also, this did feel like the film that could have been made in the 80’s and still wowed people today.

While the comedy may appear to be too strong in the film at certain times, the laughs are all well founded and the drama and action is still given enough time to breathe and stop the movie from just becoming a parody. Chris Hemsworth has grown into his role as Thor perfectly, and like Captain America: Civil War, has shown that his third outing with a team-up is certainly his best. Ragnarok may not be the best MCU film, but it’s definitely the funniest and most spectacular!