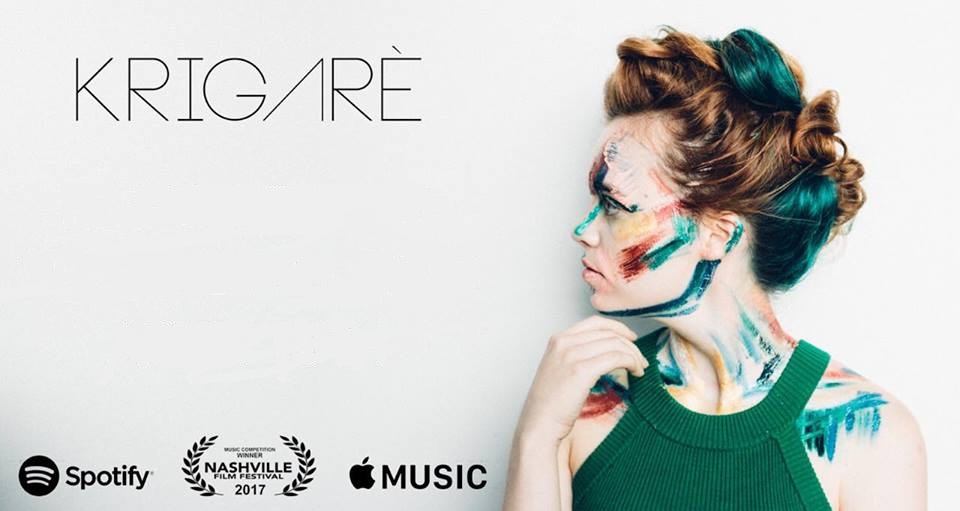 Starting off 2017 with a bang, KRIGARÈ is definitely one of the greatest singer-songwriter’s to come onto the scene. Previously releasing music under Kennedy Noel, Krigaré has proved to be a strong presence and a great change from her previous persona. With songs such as ‘Falling Apart’ making me want to punch the air and ‘Sleeping Awake’ taking my breath away, I knew it was time to finally have a catch up with Kennedy/Krigaré to see how everything was going and find out more about that EP.

The new song ‘Sleeping Awake’ has just come out, how would you describe the song to a first time listener?

The song is about what it feels like when you’re stuck in a state of feeling numb. It’s suppose to sound overwhelming and kind of chaotic, because that’s how it feels when you’re battling your inner self. My hope is that people can get that emotion and feeling from it!

Congratulations on the song, the message I have seen have been very positive. How do you feel by the reaction to the song?

Thank you! People are starting to call it their favorite, so I’m so glad people are receiving it so well! It feels good to have people love what you put so much work into.

Is there any news on the upcoming E.P. that you could possibly share?

We still keep going back and forth about it! As of right now, we’re just releasing everything one song at a time, but we may put it into a pretty package by the end of the year.

You have got some shows coming up, where can we next see you perform live?

I will be playing a local show in Nashville on July 2nd at Cafe Coco! I will also be doing a few dates in Philadelphia that next week in July!

I know that Krigare means Warrior, what made you decide on that name?

My personal name means Warrior as well, so when I was wanting to do a name change, I wanted to pick a name that still felt like mine. I needed it to feel personal so that I didn’t feel like I was putting on a persona. I decided to look up all of the different translations of Warrior, and fell in love with the Swedish translation of it!

The first song you had out this year was ‘Falling Apart’, a song which is still a favourite of mine from this year. What was it like bringing that first song out under the Krigare name?

Aw, thank you! I’m so glad you like it! It’s really been an overwhelming response towards these new songs and direction. People are responding to these songs better than they ever have before, which feels so rewarding. I couldn’t be happier with how my first release went!

Will we be seeing any more songs soon?

Absolutely! Definitely be expecting more music throughout this year!

Thank you for your time as always, anything you want to share with your fans?

Thank you for all of your support! Just keep an eye out for new videos, and covers coming very soon!

Thanks Kennedy, you are a star!!

How great is this girl? Bringing her third some under the Krigarè moniker, Kennedy brings another fantastic addition to her collection with this banger!

‘Sleeping Awake’ is surely a pop-influenced track compared to the first two songs, but this still hits hard. What I always enjoy about Kennedy is that she doesn’t shy away from singing about her experiences, this track is brimming with personal nods to her own life and what she has been through.

I never tire from hearing Kennedy’s music. Truly one of the nicest musicians on the planet and a soul which you need to hear as she pushes the boundaries of music by crafting these brilliant tunes. Hopefully we aren’t too far away from the eventual E.P. due for release later this year.

You can hear the song on Spotify and buy now on iTunes!

Born in London and having a huge link to Cuban and Caribbean sounds, there is definitely a fusion of sounds and flavours to take in from this artist. I can’t name many artists who can seamlessly go between singing in English and then to a Spanish tongue, but Holly works it so well. Self-producing your own music is not easy, but Holly and her fantastic group make this sound like a great production.

The soul vibes begin from the opening track ‘El Impulso’, Holly immediately impresses with the blendless back and forth of the languages she works so well. The tune comes in with an easy beat and then the party comes to life. Then next on the list is ‘Run’ and immediately I love the soul/ska blend that comes. If the first track was a display of the European roots, this song is the tribute to the Caribbean vibes which Holly and her band have truly embraced over the years.

Listening to this E.P. makes me think I am taking a trip around the world and each song is a new destination. ‘Dead Coral’ was a dance number in which I feel the need to don my Cuban heels and hit the dancefloor. England has made a great name for itself with many great ska acts, and I would think maybe The Specials have been a big influence on the track ‘Mellow Drama’ (If I am wrong, I won’t be upset with being corrected, it is just my opinion and I mean it in a positive way). Hearing this song makes me wish that Holly Holden could maybe collaborate with miss Millie Manders for a track or two (please make it happen!).

‘Benji Muji Mau’ is fun, energetic and continues this party that we have been enjoying for the last 15 minutes. Then the closing track ‘Born At The Right Time’ allows the release to come to a nice climax. Reflecting on this last song and the E.P. as a whole, there isn’t many acts who can make songs that sound both original and inspired. The blend of influences is surely the winning factor for Holly’s music and I hope she has her passport in hand to help create the next release! An inspired experience and one I had to hear twice in a row because it was a fine one for 2017!

The E.P. is due for release this spring.

Krigarè (AKA Kennedy Nöel) is starting a new chapter in her music career and 2017 looks set to be great. A few years ago, I got the opportunity to interview this talented young lady and I could only wish her all the best in her journey. It was around the release of her ‘Cross-Over’ EP, the pop-dance title track was very punchy and addictive. In fact, it was one of my favourite songs of 2015. Then I found out that young Kennedy was making music before she reached her teens, this girl has got so much talent.

‘Falling Apart’ is Kennedy’s first release as Krigarè. ‘Falling Apart’ is definitely a more grown up offering from this singer/songwriter. The emotion is high in this track, the tune pulls you in with an almost Celtic tone and the echoed vocals over the song adds to the eerie ambience. It is different to the tunes you would normally listen to, but that’s what you need now and again. Krigarè has stated that the narrative of her upcoming EP is about her inspiring story of surviving two bouts of cancer. The title ‘Falling Apart’ can be seen as she asks herself about her own mortality, describing some dark moments using the medium of music.

I know I said it before, but I honestly think this girl deserves so much success. To see her stories inspire such breathtaking music is worth a few plays already. Does she let what has happened to her bring her down? No! She has fought through it all and has fought “to see the horizon” and has done that so well. Also, did you know her name means Warrior in Swedish? Krigarè is truly an inspiration.

I was so happy that Kennedy/Krigarè and I got back in touch and I look forward to reviewing her future tracks. From this first taster in the new direction, I think I may have a favourite for 2017 already! This girl has a heart of gold!

also, it is worth checking some of Kennedy’s old music here!