The following article will contain spoilers.

A found-footage episode is finally provided by Doctor Who, and it works rather well. Obviously, it is given that twist of sci-fi and when you find out the truth behind the capturing of the footage, it really doe’s add a bit of creepiness to it when you think of surveillance today. When a ship is found to be practically deserted, The Doctor and Clara find themselves in the middle of a rescue mission. The crew in the mission is made up of leader Nagata (I just want to say I really liked Elaine Tan in this episode, she was a strong and confident character who you cheer for all the way), the suspicious Chopra (Neet Mohan, another fine cast member but I think could have done more), Deep-Ando (who was in deep doo-doo) and cloned grunt 474 (portrayed by Bethany Black, apparently the first transsexual actress ever on the show) as they head up the mission. As they find The Doctor and Clara, they too begin to explore and learn about what is happening in the 38th century on the Le Verrier space station (named after the French mathematician). The Morpheus pods fill one room of the station, supposedly able to stop the need for sleep. Clara gets dragged into one of them, and is then freed by The Doctor. But has this left a mark on her? We also find in another pod the man known as Rassmussen; the inventor of the Morpheus pods. Then, the story really kicks off.

From the beginning, the story is narrated to us in the found-footage style and is narrated by Rassmussen throughout. Suspicions arise that he is narrating this story after experiencing its climax, and yet events come up which would show this to be not possible. The creatures or “sandmen” are created through the dust that is made in your eyes from the sleep. As the Morpheus machines can make a month of sleep happen in five minutes, all the dust collects to create something horrific and sentient. All the talk of electronic signals in operation in the pods and creating the monsters is just the start, as we see something much deeper is happening and it isn’t just a pleasant surprise the monsters are here. One by one, the crew are picked off. After Rassmussen shows the survival rating for all the soldiers, I did begin to wonder about his true intentions, and the fall in the gravity shields also was not caused by the creatures. Hearing the song ‘Mr Sandman’ by The Chordettes is indeed now very creepy, it will be another one of them simple yet effective fear methods that will last for a long time to come. I know a few people may get lost on the whole surveillance idea, but I think it played out pretty well and answers how Rassmussen had all the footage for his film. The chilling truth being revealed in the climax speaks on many levels of horror, and the final shot is just terrifying. 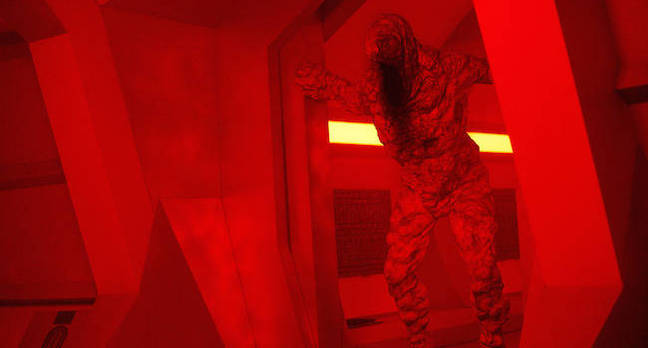 My praise for this episode is high, the highlight performance was Reece Shearsmith, he just brings a great edge and to see he was not just a villain, but the central force behind all of the happenings of the episode was indeed a great turn. Seeing his face crumble into sand while he laughs was chilling and exceptional. I am glad Elaine Tan’s Nagata survives till the end, she was a strong character and I think she deserves another episode to really expand her role. While the rest of the supporting cast was a bit lacking, you can’t help but praise Bethany Black for her part as the cloned soldier, even though I think she could have done more. Jenna Coleman was great, and the foreshadowing of her impending departure once again looms over the show, but were there any clues with the whole effect of Morpheus on her? Peter Capaldi continues his run of being a great Doctor, though not as impressive as delivering THAT speech last week, he continues to elude his own Doctorisms (yes, I just made a new word. Or have I?) for the audience and impress many. Mark Gatiss always has a good eye for the darker Doctor Who elements and each story he writes always seems more like a nightmare than a traditional alien story which is always a benefit for the show. The idea that the sandmen could return at a later time is indeed an interesting one and it would be great to see these creatures get a life outside of a space station and really prove to be a menace to the universe.

Final points, the change in opening titles were a brave choice, but keeps with the episode theme throughout so that was great to see. Also is it fair to say I may see this as possibly my favourite Mark Gatiss episode? He really does tackle a new angle of fear well and I am sure there was more in this episode which will feature into the future than we tend to believe at this time. An absolute cracker and I would give it full marks for the wonderful execution alone in its format. If not for the underuse of some cast members, you’d be looking at a perfect 10. Next week, we face The Raven and apparently a whole host of aliens…and Ashildr! And Rigsy, I can’t forget Rigsy!!