The Star Wars franchise has been around for 40 years, and with the upcoming release of The Last Jedi this December, there is no sign of slowing down for the hit film series. While many fans may know the inside and out of the films, there are a few facts about Star Wars that may have passed you by. Did you know who almost became Princess Leia or the fact that Jar Jar Binks may be more popular than first thought? Have a read of these eight Star Wars facts and I hope you enjoy them.

No, I haven’t been drinking too much of that blue milk. Jar Jar Binks actor Ahmed Best is indeed an award winner for portraying the bumbling Gungan, but it is in the best way possible. While little praise was given to the character in the prequel trilogy, Ahmed made a great comeback with him reprising his Jar Jar role in all the Robot Chicken Star Wars specials. It was in the second special where Ahmed Best finally got rewarded for portraying Jar Jar Binks…and it is done really well. No matter what you thought of the character in The Phantom Menace, you will enjoy this video! And also, do we really believe the Darth Jar Jar thing?

Poe Dameron was meant to die

Hard to believe that the best pilot in the resistance wasn’t going to make it past his first film, but we are certainly glad that he did. In The Force Awakens, the character was originally envisioned to be biting the bullet at that point where the TIE fighter crashes onto Jakku. J.J. Abrams apparently thought better of this after casting Oscar Isaac in the part. While Poe was heavily featured in the first act, he was nowhere to be seen till the final assault on the Starkiller Base (and the rescue of the star map). Hopefully The Last Jedi will see him in a more prominent role throughout.

A Woman Originally Portrayed The Emperor

How many of you remember watching The Empire Strikes Back when it was first released? You may have noticed since re-watching the film once it was released on DVD that it had a noticeable yet justifiable change. We all know that Ian McDiarmid portrayed The Emperor in Return Of The Jedi and again in the prequel trilogy (and he was brilliant). But, the Emperor was first portrayed by Marjorie Eaton. Yes, a woman was The Emperor under a lot of make-up and wearing chimpanzee eyes that had been placed on her. While the woman was the body, the voice was by Clive Revill. Thankfully, this is one thing I am glad to have seen changed and Ian McDiarmid is the better Emperor by far!

Jodie Foster, Sissy Spacek and Cindy Williams Could Have Been Princess Leia

There were a few actresses who apparently went for the role of Princess Leia Organa. While we know that Carrie Fisher eventually got the role, her book ‘The Princess Diarist’ reveals that she auditioned for Carrie at the same time, as did the actress Sissy Spacek. Imagine if Sissy was cast as Leia? Also, Cindy Williams apparently went for the role too and also Jodie Foster. While I think Jodie Foster would have been superb, she would have only been 13-14 at the time of filming and definitely would not help to keep Luke and Leia at the same age. Thank goodness Carrie Fisher took the role.

All The Star Wars Films Have Been Shot In England

That is true, if you leave out the poor excuse of an animated film from 2008 (but I do love the Clone Wars show). All the live-action films so far have been filmed in England, starting with the first movie shooting in Elstree back in 1976 (which in turn has become the basis of its own film). Since then, all the films have been shot in England and places around the UK. Yes, certain desert and snow scenes had been shot in other countries, but the Star Wars franchise can honestly call England its home. Who Framed Roger Rabbit, Alien and even entries in the Marvel Cinematic Universe and the DC Extended Universe have since come to the UK to shoot mainly because of the great work made in the space opera franchise!

We all know Darth Vader as soon as we hear that voice, even in spin-off movie Rogue One we saw James Earl Jones come back as the lord of the Sith! But, the man inside the suit has changed numerous times. Leading the original trilogy in the suit was David Prowse, he had a great presence and even today at the age of 81 has a powerful handshake that will crush your wrist (and the man is a pleasure to meet). We also have Hayden Christensen in the suit in Episode III. Then we also have Bob Anderson, Gene Bryant, Spencer Wilding, Daniel Naprous and Sebastian Shaw inside the iconic black armour. Plus, one last mention to Ben Burtt who made the iconic sounds of Star Wars which includes the breathing of Darth Vader! Darth Vader is one of the biggest villain’s in the world and it is clear to see how much has gone into the character over the years (and don’t even get me started on the animated shows and video game performances).

As we saw in the original trilogy, Carrie Fisher’s hairstyle was changed in each film and each look was considered popular and started trends. With the character of Rey, it seemed to start the trends again with her three buns style in The Force Awakens. But, did many of you notice that in the lead -up to this film that she had her hair covered a number of times? There was a workout photo where Daisy Ridley was shown with a pillowcase around her head to keep it secret. With the success of The Force Awakens and the popularity of Ridley’s Rey, I think it is justified that all these measures are made to keep back any spoilers…including the hair on Daisy’s head (and what about Mark Hamill’s beard or the lovely scar that Adam Driver’s Kylo should be sporting?).

Anthony Daniels Is In EVERYTHING as C3PO!

For 40 years, Star Wars has had many constants in it. The lightsabers, the Jedi, X-Wings, exotic planets, superb villains and a certain protocol droid who has been there for all of it. Anthony Daniels has not been afraid of type-casting by taking his portrayal of C3PO to all the different medias that is available. To make it nine out of nine live-action films, Anthony Daniels will be back as C3PO in The Last Jedi. Plus he has appeared in Star Wars: The Clone Wars, Star Wars: Rebels, The Muppet Show. Sesame Street, Lilo and Stitch, Robot Chicken and even The Lego Movie in 2014! Also, how many video games and other shows has he appeared in? Anthony Daniels has made C3PO a part of himself and there is no way you could ever have anyone else in this role!

What did you think of these facts? Have you got any facts that you want to share? Message on this post and thank you for reading. 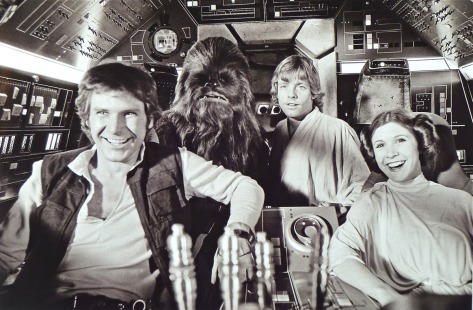