This year has been one of the greatest for the pop-punk band (technically a one-man-band at this point), and as it began with some great UK shows by Mr. Brendon Urie and his tour band, it’s only right to end the year with some too.

At London’s own Alexandra Palace, Urie made his debut at the beautiful venue that Saturday night, and brought every last bit of that charismatic and sparkling personality we all know and we all sure as hell love.
With his tour band, consisting of guitarist Kenneth Harris, bassist Dallon Weekes and drummer Dan Pawlovich, Urie rocked the place all night long, never missing a beat or skipping a note (but in fact added some extra high notes, as he does them oh so well). With a nostalgic throwback to the 2000s era of the band, mixing in a fair share of the newer tracks in the band’s repertoire, the night was a sure success among all fans in attendance, young and old.

The show began with an opener of the Black Eyed Peas’ hit “Pump It”, but that wasn’t a long-laster. It was just a short warm-up, getting everyone pumped for the experience that was about to begin. It worked! Because as soon as that music faded and the beginning notes of Death of a Bachelor hit “Don’t Threaten Me With A Good Time” echoed, everyone was dancing and screaming and singing and – if they were like me – were jumping in the hopes of catching a glimpse of the man behind the voice.
Nothing sparks a fire in the crowd more than the LA devotee himself screaming his welcomes at his “motherf*ckers” in the audience of over 100,000 before him. There was not one moment on stage where Urie stopped and breathed – he kept going, kept his feet moving and hit every note he needed to.

I would personally say one of the surprise hits on the setlist was the Fever track “Time To Dance”, because of that fact itself: it’s a track from the band’s debut album A Fever You Can’t Sweat Out, which was released over 11 years ago. And yet, Urie added this non-single track because obviously, he knows what his audience loves to hear. Everyone in the place was singing along, dedicated to every word of that track, singing their lungs out for the love of their emo idol on that stage.
Another stunner that night was the performance of newer track “Crazy=Genius” from Death of a Bachelor. The energy was electric, and the roaring 20s feel shook through everyone on the floor, but how could you make that effect even greater? Two words: drum off! That’s right, some stage-hands brought on a second drum kit so Urie himself could play alongside/battle against Pawlovich in a once-in-a-lifetime breakdown in the middle of the track. If crazy equals genius, then Urie sure is a rocket scientist! We know of his musical talents, among multiple instruments (as demonstrated on his 2016 release), but to see it with your own eyes just makes the fact so much clearer. It was time to pinch; this was NO dream!
And what’s a Panic! concert without that one song? That ONE single? You hear the beginning notes, you freak out because of course “I Write Sins Not Tragedies” was going to be played. One does not simply go to a Panic! concert without expecting that song. Introduced as “one of our newer songs, so don’t worry if you don’t know the words”, met with an obvious giggle from the crowd, every single fan had that bond for a few short minutes because no matter if you’re an old fan, or newly getting into the band, you know this song. This was the song.

And I can’t finish this without a mention of a regular now in Panic! concerts, which everyone expected as soon as they saw Urie make that stroll up to the grand piano on the highest platform of the stage. “This isn’t a Panic! song, but I wish it was”, said Urie as he prepared. This was time for “Bohemian Rhapsody”.
As I began with, 2016 has been a massive year for Panic! At The Disco, and this song was one of the reasons. As well as being released as a studio recording as part of the soundtrack for the DC movie Suicide Squad, Panic! has made this classic rock hit a regular in their concerts and every fan gets excited about this as much as they do about the original Panic! hits. It’s that song that brought us all together, swaying, singing, some were crying. It shows that the whole room, they are a family; every one of us are one large family. That is what a fandom should be. What we felt in that moment. One family.

Overall, with the performances and the interactions with the crowd (Urie spreading his love among the thousands in front of him), there was never a dull moment that night. 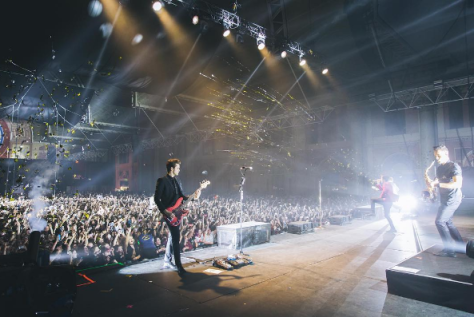 This was Panic! At The Disco’s first performance ever at the Alexandra Palace. Thank god we made it a memorable one!