Wow, 9 years since The Simpsons Movie flooded into cinemas and took the world by storm. Arguably a bigger hit than many would predict, and the cinematic scope saw the film take more risks and different directions than the show ever would. One thing that did work really well in this movie except for the top humour, great cameos and well-rounded story was the music! Who composed this film you may ask, it was Mr Hans Zimmer! That is right, guy behind The Dark Knight trilogy, The Lion King, Gladiator, Rain Man and many many more great films. But, what really worked about this soundtrack?

To begin, we get an epic reimagining of the classic theme with Zimmer giving his scope to the piece. For a show that usually relied on small themes and quaint melodies, to see a grander work within its run time was a treat. Though the scale may be higher, you know immediately this is The Simpsons. The first tracks really blend the classic yellow family well with the signature compositions of Hans Zimmer’s previous work. It is fun and grand; your ears will love hearing this. In tracks such as ‘Doomsday is Family Time’ and ‘Release The Hounds’, it almost feels like we are getting tunes ripped from other soundtracks, but they fit in perfectly here.

‘Thank You Boob Lady’ is a typical sound for The Simpsons and fits in well to the film, and it would be fun to hear it pop up in the show, maybe with the Boob Lady herself? All the tracks fit in well, but there is one stand out track and you all know what it is: Spider Pig! Using the original Spider-Man composition from the 1960’s animated series and giving it a more operatic twist that astounds and makes you laugh. If you remember seeing the film with Homer singing the Spider-Pig theme, I didn’t think at that point it would come back, but am so glad that it does. 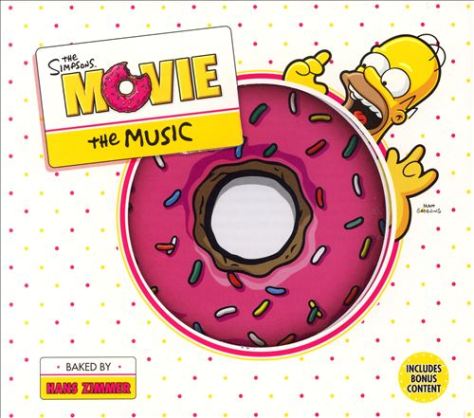 NEXT WEEK, I REVIEW ‘QUEEN – GREATEST HITS II’ FOR THE RANDOM REVIEW!

3 thoughts on “The Simpsons Movie – The Music. RANDOM REVIEW”