Dragons, Death and Dang…HE IS BACK!?!? The three D’s really come to affect here. Episode two of this new season continues to bring us up to date on the happenings in Westoros. We know Jon Snow is still laying on a table, Bran Stark is developing his powers with the Three-Eyed Raven, the Greyjoys are still a bit moody and Tommen is determined to prove his power as king. This episode had the same structure of the first and gave us just enough of a glimpse to see what everyone is doing. Sansa continues her journey to the wall and learns more about the status of her sister Arya. Arya, currently blind and living on the streets, is still looking worse for wear and looks ready to give up on her “vengeance”.

Dragons are back as Tyrion sees to keep them alive after they refuse to eat, and this looks to continue with no Daenerys to keep them going. The leaders of two factions in the kingdoms have lost their lives in this episode, and it also shows that Ramsay Bolton is still the most horrific bastard in the show. Iwan Rheon claims his new title with ease and looks set to continue his killing spree. Then we have our main focus yet again at Castle Black. Ser Davos begs his rival to bring back Jon Snow to the world of the living. Melisandre is conflicted with the idea of bringing him back, but she agrees to perform the ceremony. Though nothing happens, and they all leave the room with just his direwolf Ghost remaining with the body of his master.

Kit Harrington has had an easy couple of episodes, just lying there and pretending to be dead. Jon Snow may have spent nearly 2 hours as a corpse, but *SPOILER ALERT* if you really did not think it was going to happen while everyone else knew, but Jon Snow is alive! It was great to see Bran Stark back and when you see actor Isaac Hempstead Wright sharing a screen with Max Von Sydow, the look you get is indeed impressive. A flashback of sorts really was fun, and we got to see a bit of insight to the Stark siblings of the past (Ned, Benjen and Lyanna) and we learn about Hodor before he could only say his name (but that’s not his name).

Lena Headey continues to impress with Cersei 2.0 who is now powerless and kept in her Red Keep, but it looks like she will be vital to Tommen who begs for her help. Then we have Melisandre who is still conflicted with her faith, Carice Van Houten is definitely the finest actress of Season Six so far and it will be interesting to see where her character will be after this latest…surprise (it’s not a surprise, Jon Snow is alive and we all knew it would happen). We still need more focus on specific characters, but it is good to see we have caught up with almost everyone. Next week can’t come quick enough! 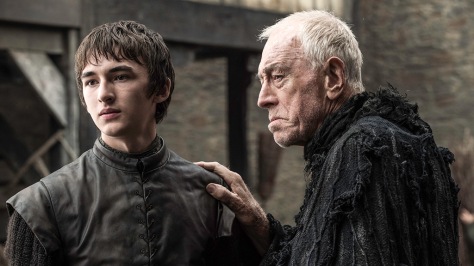