This sounds like a broken record when it comes to this story, but I think it is one of the best Batman stories in existence. A real look into the mind of both Batman and The Joker is both a fascinating and disturbing insight. Where this book really finds its strength is how we get under the skin of The Dark Knight’s greatest ever foe! The trailer is officially out and the film is due for release on Blu-Ray and DVD later this summer. Before we get to the trailer, here are five points you need to know about the upcoming adaptation…

The man behind V FOR VENDETTA, FROM HELL and WATCHMEN! Alan Moore not only delivered one of the most stunning graphic novels of our time, but THE KILLING JOKE was also inserted into the continuity of the DC comics universe. This included Barbara Gordon’s end as Batgirl, the “origin” of The Joker and even helped towards the inspiration of the Birds Of Prey TV series (worth a watch, honestly. It is a bit tacky, but was ok). This man is not afraid to really flesh out some horrifying points to the characters he works with, and this is very evident throughout these 48 pages.

The book itself is relatively short, and it would be hard to make a full-length animated feature on that alone. Luckily, there will be a 15 minute prologue which will set up the events of THE KILLING JOKE. This will give an insight into Barbara Gordon as she donned her cape and cowl. This would hopefully be enough to help expand on the source material and keep it as intriguing as the book did.

If you were a fan of Batman: The Animated Series from the 1990’s, you will be glad to know that Bruce Timm (the co-creator of the show) is producing this adaptation. If we can trust anything, it’s that the best ever animated superhero series was made because of this man. His credits expand to much of the animated outings featuring Batman. If the news of this guy was big, just wait and see who he brought with him…

You heard that right, the definite voices of Batman and The Joker will both be present for this epic! It was previously announced that Mark Hamill would quit voicing the character after the 2011 video game Batman: Arkham City. But…said he would return if The Killing Joke was ever made into a film. Our prayers were answered, and it is nearly upon us. As for Kevin Conroy, this is the man who made Batman a huge star and introduced us to two distinctly different sides as both Bruce Wayne and Batman. It will be great to see these two exchange words again, and we will only wish it won’t be the last time. Also, let’s not forget voice actress extraordinaire Tara Strong will be on board voicing Batgirl!

All the superhero movies seem to strive towards an R rating nowadays (thank you Deadpool…By the way, Deadpool was freaking awesome!). With the content said to a faithful adaptation of the graphic novel, it is safe to this film will need a strong rating. The depths we fall into with the psyche of Commissioner Gordon and Batman being put to the test, you are going to need to brace yourself. The perfect example of how similar Batman and The Joker are needs to show every twisted detail. 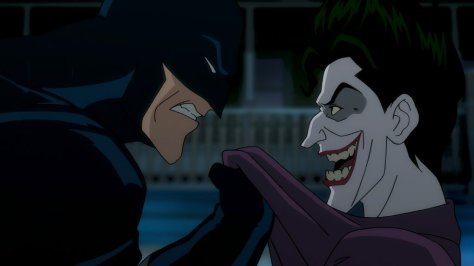