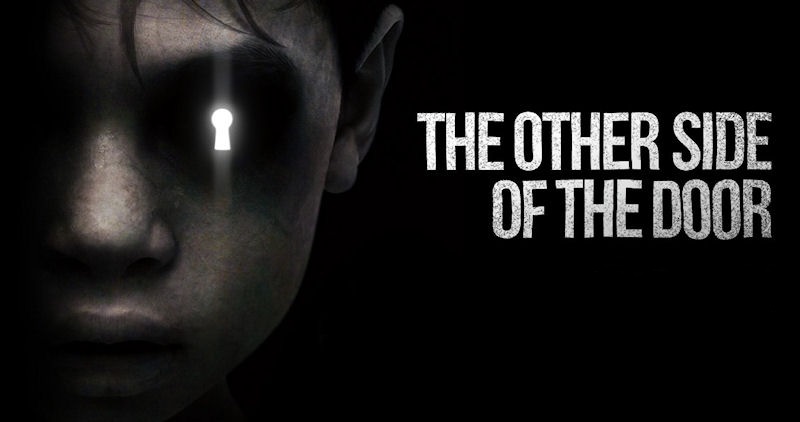 Johannes Roberts has been very busy for the last few years, since the release of the 2012 film Storage 24, Johannes has been hard at work on some new films which will shock and scare you. Well…this one does have a few shocks in it. Starting off, the horror cred is strong with the inclusion of The Walking Dead star Sarah Wayne Callies as she portrays Maria. Set in India, a mother and her children are involved in a car accident which brings about the death of her song Oliver. Falling in to a deep depression, Maria is told by her housekeeper Piki that she can bring her son back to say goodbye. By following a ritual, at an abandoned temple, in the middle of nowhere, she can communicate to him, but cannot open the door that holds him back. Well, I am sure you can guess what she does…still guessing…yep, she opens the god damn door!

The film reaches a great turning point as we begin to see a more psychological game happen. Where we now know that an ancient evil has been unleashed, we begin to see Maria’s mind begin to fracture. Her daughter Lucy knows that her brother is back, but it’s not a happy reunion. Then we see her husband Michael is oblivious to the fact that they are being haunted by Oliver. Not only has Maria got to contend with her now demonic son, but also the horrific god is after her and then there is the tribe who looks to keep the balance of life and death also looking to bring Oliver back to his place of rest. It all goes insane, Maria is barely holding on to her mind as “Oliver” begins to work against her and then the deaths begin. I don’t want to spoil how it all goes in the end, but let’s just say the title will be more than appropriate when it comes to the closing credits.

A ghost story which uses a lot of supernatural themes and the twist given to it in this movie is definitely welcome. Director/Co-Writer Johannes Roberts will hopefully be on his way up the ladder with this movie, he truly can make great pieces and this is an example to get you onto his films. The setting of Mumbai does make it interesting and adds to the atmosphere, I mean would you really have a spare temple in England? (If there is one, then that could be a sequel). THE OTHER SIDE OF THE DOOR is clearly a creepy film which really does give us a huge lot of development on lead character Maria and her journey is given such great detail. Sarah Wayne Callies really does pull off her part well in this movie, she truly embodies the part so well. Jeremy Sisto, though is a strong and supporting character, he does seem to be absent at certain points. But I have to say young actress Sofia Rosinsky really does give a great performance and convinces you throughout the film. Also, I initially found it hard to say whether or not Suchitra Pillai-Malik’s character Piki was actually helping or wanting to cause chaos (I really thought she was purposely wanting to bring chaos), but we do find out her real feelings as the film goes on. It’s not a perfect horror, but it certainly will creep you out.