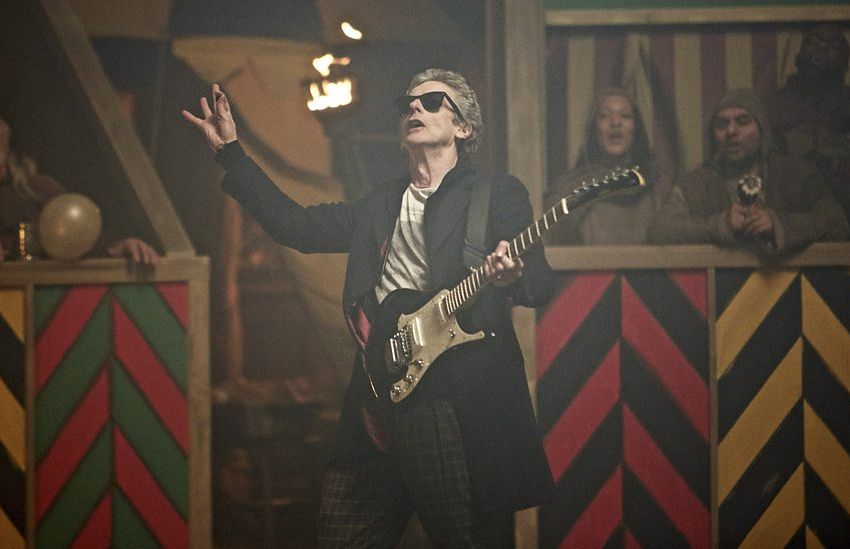 Series Nine gets a huge kick up the backside and brings probably one of the strongest openers ever! After the few teases in the last week showing the Doctor hanging around on Karn and Earth during the 1100’s, we are brought straight to the big battle that was teased. This so far is probably Peter Capaldi’s best performance of The Doctor since the episode ‘Listen’, my favourite of Series Eight. Before the Time War, there was another war. A war fought for so long that it was almost forgotten. The Doctor finds a child, scared and begging to be saved from “hand mines”. His only hope, The Doctor, of course. But, The Doctor runs away, and has continued running since. Peter Capaldi’s Time Lord then goes missing, nobody can find him. UNIT can’t get him on the phone, a creature made of snakes visits all the possible places The Doctor could be with a message for him. We get to see a bar filled with aliens The Doctor has faced before, The Shadow Proclamation (The Judoon were fun, hopefully we may see more of them one day) and even a visit to the Sisterhood of Karn; the guardians of the Flame and Elixir of Eternal Life (or utter boredom as said by Paul McGann’s sarcastic Doctor). Even Missy can’t find him, and she is literally stopping planes to get his attention.

Clara, concerned by the lack of communication from her friend, joins forces with a very unlikely ally to find him in Essex (I know, ESSEX!! Honestly. I mean, 1100’s Essex is still Essex though! But anyway, back to the review). Within this time, we have seen a very scared Doctor and a surprisingly worried Missy (though she is still not above killing for fun, even explaining her “death” as just dust off her shoulder). The axe battle provides a good laugh, and we wonder who is actually being serenaded to the rock ballad ‘Pretty Woman’. Eventually, The Doctor is to face the person he has been running from this whole time. An ancient foe returns; one that has been around and faced him many times for a countless number of years. Clara Oswald refuses to abandon her friend, even if she isn’t his best friend. Missy also comes for the ride, and winds up with Clara and a whole stack load of enemies that have been a force against her and The Doctor. Everything goes from bad to worse; everything The Doctor holds dear is destroyed in front of his eyes. References to a certain Tom Baker story, voted as the best Doctor Who story ever, is a big key to this episode. Also the episode features other uses from Colin Baker and more. I can only say well done to Steven Moffat for creating probably the best possible script using these characters I have ever seen come to life.

The finale gives a hint of some timey-wimey stuff to come. But, I really want to keep it as minimal on the spoilers as possible. This episode is purely brilliant. It is a shame Jemma Redgrave only got a minimal showing as Kate Stewart, though we will see more of her and UNIT later in the series. Jenna Coleman seemed a bit more background than I would have liked at times, I prefer when she really throws herself into the ring, though she does get some great lines such when a student says he will get his pre-chewed gum back later in the day. Also, Jenna really does come to life in the middle with her meeting with the evil Time Lady. Also, “hashtag planes have stopped” is trending on twitter at the time of writing this! The Witch’s Familiar has got a tough act to follow, but I am sure it shall be a belter! A top story, non-stop action throughout and more references than I have ever seen on the show before! 2015, Doctor Who is BACK!

WARNING: ONLY WATCH THE TRAILER FOR EP 2 IF YOU HAVE SEEN THE MAGICIAN’S APPRENTICE!

2 thoughts on “Doctor Who – The Magician’s Apprentice. “Doctor, What Have You Done?””