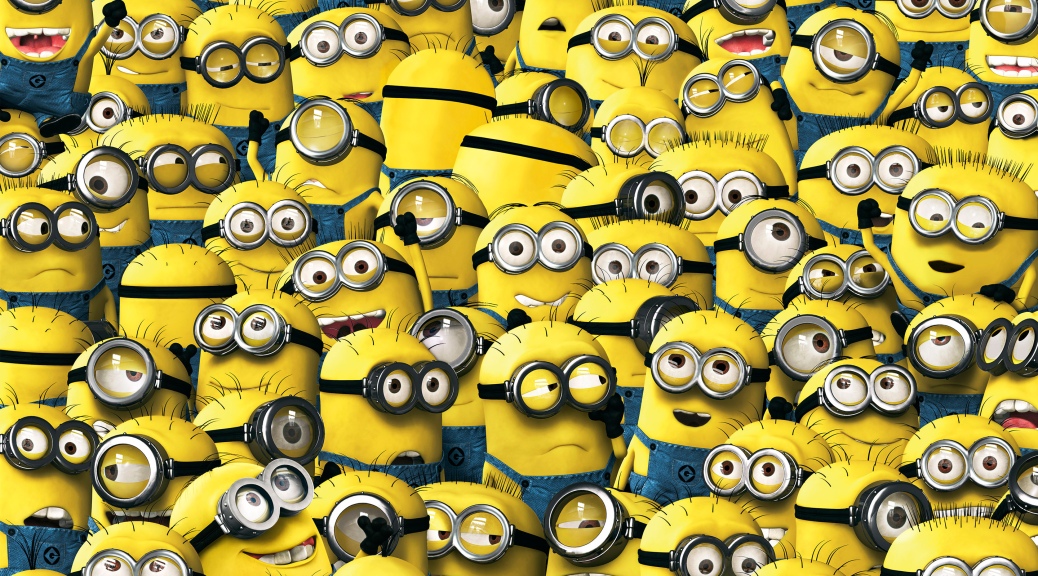 Minions, they’ve been on this planet for years (since 2010’s Despicable Me that is). They are always looking to serve the most evil master they can find. After many years, they become depressed and can’t find a master who lasts long. When Kevin, Stuart and Bob travel to America, they head to Villain-Con to find themselves a new boss, this is when they’re eyes are caught on Scarlet Overkill. Scarlet, the first female supervillain, is very famous and dangerous. The Minions are then taken in by Mrs Overkill to help with her most ambitious scheme yet…the steal the crown of Queen Elizabeth II.

The film is mostly set in 1968; this paves the way for many references to that era. This is mostly presented by the film having a great presence in 60’s London with a selection of tracks from artists such as The Kinks, The Who, Donovan and their own rendition of some classic tunes with the minion vocals. The humour continues through the title characters as it did in the two Despicable Me movies. If you enjoyed the Minions before, you will love them here. The stars are overall adorable and fun. They are pure-hearted and only want to help where they can. The laughs come from many different places, whether it is the titles characters interacting amongst themselves, the visual gags or even the little cameo you see near the end. This film is good family fun, you can see how in just five years that the Minions are some of the most loved characters in recent memory.

In terms of the cast, Sandra Bullock gives some great character to Scarlet Overkill. The villain, while not as fun as Gru, still gives a good load of laughs and is very over-the-top with her plans. Jon Hamm portrays Herb Overkill, a fun character who you kind of wish we may have had more from, a laid back inventor with a pendant for creative weaponry. Also with Allison Janney and Michael Keaton filling the cast as a father and mother of a family that help the minions and Jennifer Saunders voicing a certain member of royalty makes for some more joy in the 91 minutes you are watching that film. Although the biggest praise has to go to Pierre Coffin, he co-directed the movie and was the voice of all the Minions you see in the film. This movie is a great fun ride, it may not match the heights of its predecessors, but this is a family movie that you will love. Lots of laughs and lots of Minions, definitely a winner!