Sin City 2: A Dame To Kill For is a film which has been in production for nearly a decade. The movie begun production just after the release of the first Sin City movie. There are a few reasons as to why this took some time to be released, but for now lets get educated on how this all started.

2005 saw the release of Sin CIty. A film based on Frank Miller’s comic series of the same name. The Sin City books had been very popular during the 1990’s and presented a gritty world which featured many conflicting characters, dark tones and in-depth storytelling. Directed by Robert Rodriguez and Frank Miller too, the movie took a faithful conversion with the man who brought the world to life in the first place. Retaining the Neo-Noir aspect which is prominent within the pages, the film was critically hailed as being a great reflection on the originals work and incorporated three of the original stories from the series. The star-studded line-up helped too with lead characters being portrayed by Bruce Willis, Mickey Rourke and Clive Owen as well as starring Jessica Alba, Elijah Wood, Rosario Dawson, Michael Clarke Duncan and many more. The film earned nearly four times its budget at the worldwide box office and a sequel was ready to go…almost…

The film look set to enter production rather quickly with director Robert Rodriguez already eyeing up Angelina Jolie for a lead role in the sequel and willing to delay production to get her on the film (the role was eventually given to Eva Green, who has caused controversy with her “lady lumps” on a poster for the movie). This though was ultimately not to happen and Rodriguez afterwards blamed The Weinstein Brothers for the delay and Frank Miller stating at Comic-Con 2007 that they both had finished the script. Then after a number of years and no discussion, it seemed that the project was dead. It wasn’t until April 2012 when the film was confirmed with production beginning six months later and the official title Sin City: A Dame To Kill For (Primarily based on the story of the same name). The film was due for release in October 2013 before being moved to 22nd August 2014 (Rodriguez says this was because the space was saved for Machete Kills, which ultimately flopped at the box office). The movie sees many of its stars returning and certain characters being recast (notable Devon Aoki being replaced with Jamie Chung for the part of Miho and Manute being played by Dennis Haysbert after the sad passing of Michael Clarke Duncan) and looks set for a big release, but what do you think?

Will Sin City 2 be able to prove successful after the nine year wait? Or will the “Dame” not be worth it? Find out on August 25th when the film is released in the UK (and 22nd August in the US) 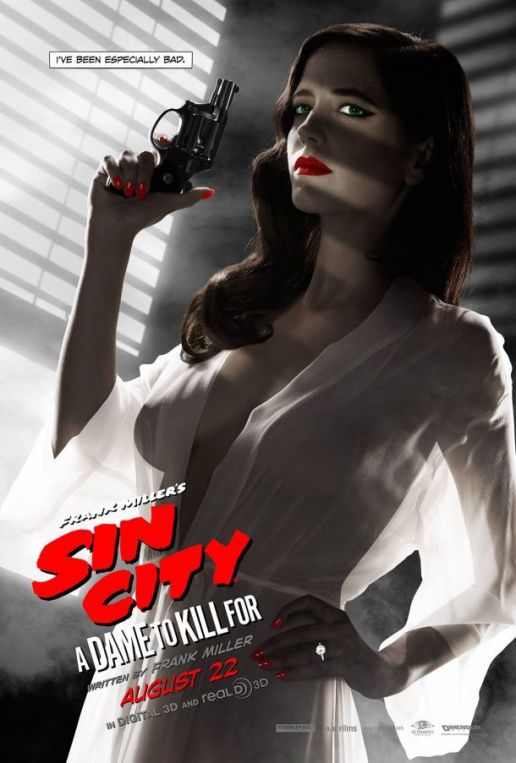